This week's post involves using different effects to create a space-based image, with a planet and nebula, so I felt it was time to have a bit of fun with things. I'm not completely content with the "nebula" part of this one, but I can work on that once Mom has finished loading the Uhaul and hit the road, in roughly 3 hours and some change. For now, though, I offer this: 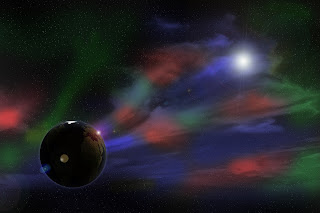 Yes, that's the Earth there. At least that part looks ok. :) The lens flare isn't positioned quite right, but fixing that entails deleting the layer that the second lens flare gets put on and recreating it again, with the flare in a different position. The dialog box used for the lens flare effect is tiny, and can't be resized, so I have to guess at placement. Oh well. I'll try again after my nap. :)

While taking a short walk outside, I had an idea that I wanted to try, so I made a few minor changes, and I think that the work stands improved. First, the image, then the explanation: 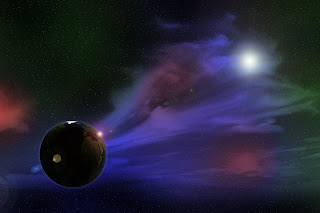 I think that this version's nebula looks a lot better. What I ended up doing is taking the nebula's color dodge layer and applied a Gaussian blur, to meld the colors together a little. Sadly, this also had the effect of washing out the colors, so I tacked on a couple of adjustment layers (vibrancy, to boost the colors, and brightness/contrast, to boost the overall effect). I ended up having to recreate the 2 composite layers, including the 2 lens flare effects, but I think that those also benefited from the process. I'm much happier with the outcome now, so I think it was worth the effort.

Posted by Unknown at 2:50 AM No comments:

This week's blog post involves a foray into the realm of Typography; the design and construction of words on a page, dealing with layout, font, color and presentation (more or less). Being a bit of an individualist, not to mention a huge geek, I decided to go with something that's near and dear to my heart: 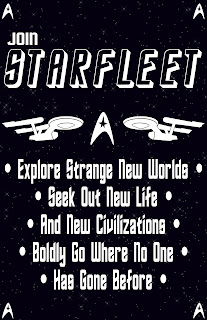 Not much to say about the piece, other than to mention that I'm pleased with the way it turned out. Please let me know what you think. Thanks.

This is a Canvas assignment, but I liked the final output enough that I decided to share.

The assignment was to take a portrait of an individual and morph it into a caricature. I had already used caricatures in a previous project (though not my work) to poke fun at the political scene, and I'm a huge fan of Mad Magazine, so I thought I would reprise the concept one last (yeah, right!) time. For those of you who are not familiar with either Mad Magazine or it's unofficial, unofficial mascot, Alfred E. Neuman, here's his mug, for your enjoyment: 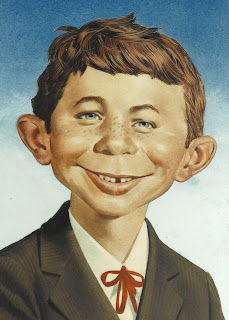 This go-around, I decided to poke fun at one of my favorite presidents, George W. bush. I selected a photo of him from early in his presidency, and I only just realized while working on this project just how much the job has aged him: 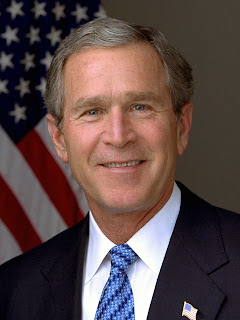 Now that you've got the concept, all that's left is to show the finished product: 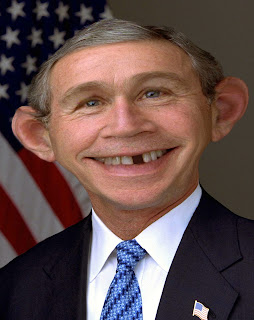 All in all I think it turned out well enough. There are some differences, of course, but I got the overall feel, I think. Comments are most welcome.

Posted by Unknown at 1:09 PM No comments:

I know, this isn't part of the weekly blog post requirements, but I wanted to share. :P

this assignment entailed integrating 3 images to create "an interesting scene". It was to be submitted as a black and white image, using masks and adjustment layers, and the image that I created for the assignment was just that, but I felt that the greyscale version didn't completely convey the entire aesthetic that I was going for. Thus, this post. Here are the two images; you make the call. 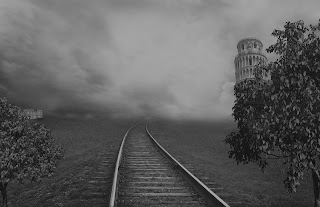 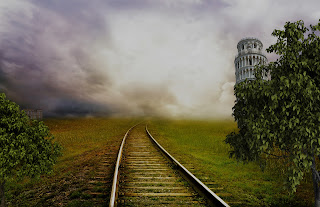 I've been told that black and white imagery often enhances the sense of drama within the subject, but frankly, I don't see that here. To my mind, the life has been sucked out of the greyscale version, and the sceen has become dull and uninteresting, while the color version not only pulses with life, it has a great deal more depth, texture and interest. but that's just me, and I admit to a small amount of bias. :D
Posted by Unknown at 9:14 AM 3 comments:

I have to say, this course is getting more and more fun each week. For this assignment, I'm to take an image with some perspective and apply a blur effect to make the image look like it's a macroscopic image of miniatures. I had some technical issues with Photoshop with this one, I'm afraid, and had to uninstall and reinstall PS in order to complete the assignment. It seems that every time I tried to apply a tilt-shift blur to the image I was working on, Photoshop would lock up, forcing me to have to stop it in Task Manager and restart it. Updating PS didn't help, but the uninstall/reinstall helped just enough for me to be able to get things done (though it still freezes from time to time). Anyway, I've got 4 images to show here: 2 using tilt-shift, and 2 using an iris blur (which I think gives a more realistic effect). So without further ado, here is this week's offering: 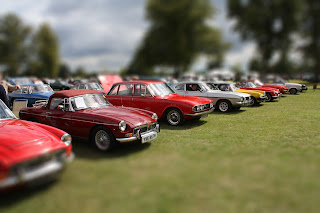 This is my first attempt at using tilt-shift blur, and while it looks ok, I think that it lacks a certain realism, so I tried a different approach. 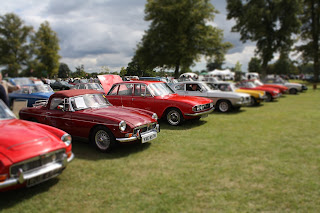 This one uses an iris blur, instead. I think it looks a little better, so far as realism is concerned (though I think a tiny bit more blurring would probably have worked, as well). 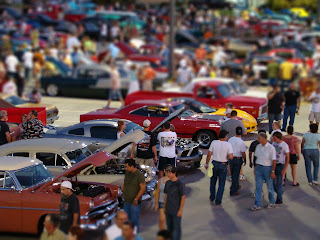 A different image here, but using the same blur effects. The lack of realism in this one is more pronounced than with the first image. 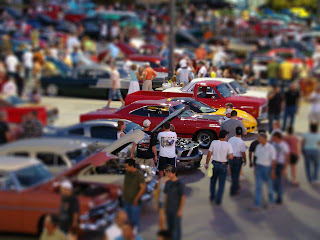 The iris blur effect here shows a great deal of improvement over tilt-shift blurring, and provides a certain amount of emphasis in the image with the focus on the red car in the center.

Just a quick update on the progress of the movie poster project. I've added a few things, and... Well, as they say, a picture is worth a thousand words: 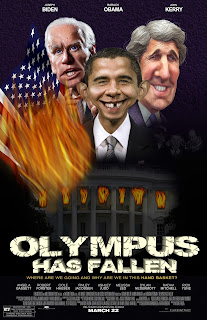 I'm still not thrilled with the way the burning flag looks, but my experiments with improving it haven't yet netted me any real success. For now, I'll have to put it on the back burner, and come back to it when/if I hav time.
Posted by Unknown at 5:40 AM No comments:

Apparently I failed to post this at the proper time, but saved it as a draft, instead. Oops?

Another fun assignment that stretched my skills, and expanded my knowledge! This week, I was to take a pair of images and modify them in specific ways, "draining" the color from one small part of one image, while transforming the color of a section of another image. Here, below, is the result: 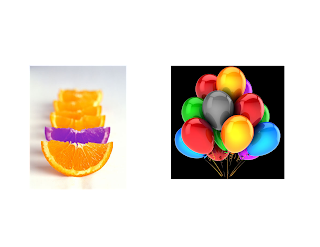 This was an enjoyable assignment, and as I mentioned, I learned a few things.